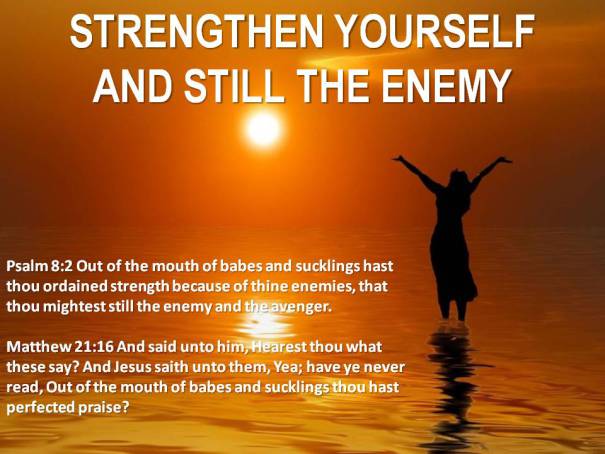 KEY SCRIPTURE: Psalms 8:2 ” Out of the mouth of babes and sucklings hast thou ordained strength because of thine enemies, that thou mightest still the enemy and the avenger”.

One of the most powerful weapons given to man is his mouth. Eating is only one of the functions of the mouth. The mouth is also meant to help chart one’s course in life. It is a weapon to destroy the enemy.

Our key scripture says, God has ordained strength in the mouths of babies and sucklings because of his enemies, that He might still the enemy and the avenger. The word “mouth” in the Greek language is ‘stoma” which also means the edge of a weapon. The scripture says God has ordained strength in your mouth. We are saved as we make confessions with our mouth. (Romans 10:10). In the ministry of our Lord Jesus he healed the sick by speaking to various conditions and they obeyed.

You must use your mouth against the conditions that seems to threaten your life.

A lady came to me with a lump in her breast. I prayed with her rebuking the lump to die and pass out of her body. I then told her to keep speaking to the lump that it is dead and gone out of her body. This sister was very obedient. She kept talking to the lump that it was dead and had no place in her breast. After a while she decided to get back to the doctor who diagnosed that she had the lump. The doctor checked and asked her, who told you, you have a lump in your breast? The sister said “doctor you examined me and confirmed that I had a lump in my breast”. The doctor remarked, “Well I see no lump in your breast”.

This sister used her mouth to ‘cut’ the lump out of her body. Stop complaining about the problem and speak to it.  The Bible said “whosoever shall say to this mountain be thou removed and be cast into the sea,  and shall not doubt and believe that what he says shall come to pass,  he shall have whatsoever he says. (Mark 11:23).Note: Your mouth is an instrument to fight, use it appropriately.

In the name of Jesus I speak to any condition in my life that does not honour God’s word to comply and respond according to the normal way God designed it to be.

Romans 10:10 “For with the heart man believeth unto righteousness; and with the mouth confession is made unto salvation”.

Matthew 8:16  ” When the even was come, they brought unto him many that were possessed with devils: and he cast out the spirits with his word, and healed all that were”