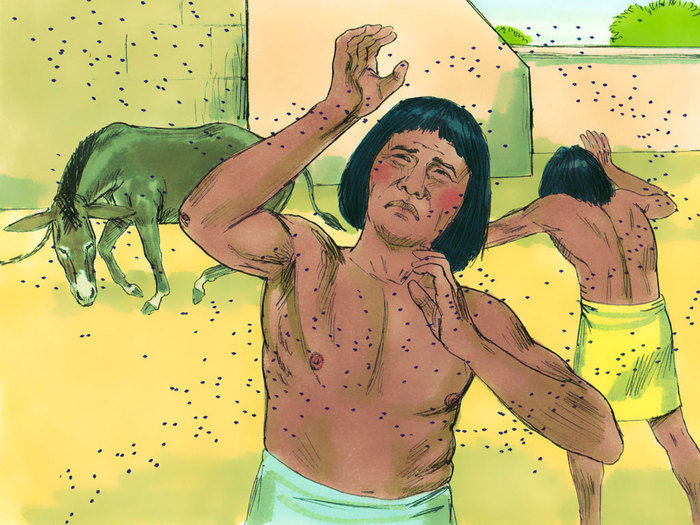 This time Moses did not tell Pharaoh what the next plague was. He just asked Aaron to stretch out his rod and strike the soil of Egypt.

Aaron stroke the land of Egypt and it turned to lice all over Egypt. Exodus 8:17 reads “And they did so for Aaron stretched out his hand with his rod and smote the dust of the Earth and it became lice in man and in beast all the dust of the land became lice throughout all the land of Egypt”. This was a very horrible state for the Egyptians. From this story, we also learn something about the working of miracles. God commanded, they obeyed and the result was the miracle. We experience miracles as we respond in faith to what God has said. One may ask, I have tried doing as commanded but failed. Every failure is not God’s refusal to answer, but it’s our failure to act in faith.

In Matthew 17:16, a man brought his son to the disciples of Jesus to heal him but they failed. “And I brought him to thy disciples and they could not cure him”. The Lord did not attribute the result to God’s unwillingness to answer. He said they were a generation of faithless and perverse people. Unbelief is the cause of many failures to answers of many prayers. When the Lord Jesus rebuked the spirit of infirmity it quickly left the boy and he was made whole.

I had a similar experience when two of my sons in the Lord were praying for a girl who had collapsed with no positive results. The moment I arrived and rebuked the demon to leave her alone, she recovered. Why couldn’t they help this poor girl. Many times, we do these things with a focus on ourselves and also wonder how the result would turn out. Such an attitude keeps you in the soulish realm and not in the spirit. The proper way, is to act in such moments with our focus on God and his word as we come in anger against the demon tormenting the individual. We also must not wonder how the result will turn out but are only be assured of a very positive result. If you confront the devil this way, you give no place to the flesh or human thoughts to get into the way of the Spirit.

Like Moses God has given His word. We   have also received His word to stop the devil and bring solutions to suffering humanity. Let us take up the challenge and bring glory to his name.

In the name of Jesus every demon bows, sicknesses depart and the oppressed are set free as I act on God’s word to set people free.

Jesus answered and said unto them, This is the work of God, that ye believe on him whom he hath sent.”

John 14:12 ” Verily, verily, I say unto you, He that believeth on me, the works that I do shall he do also; and greater works than these shall he do; because I go unto my Father”.