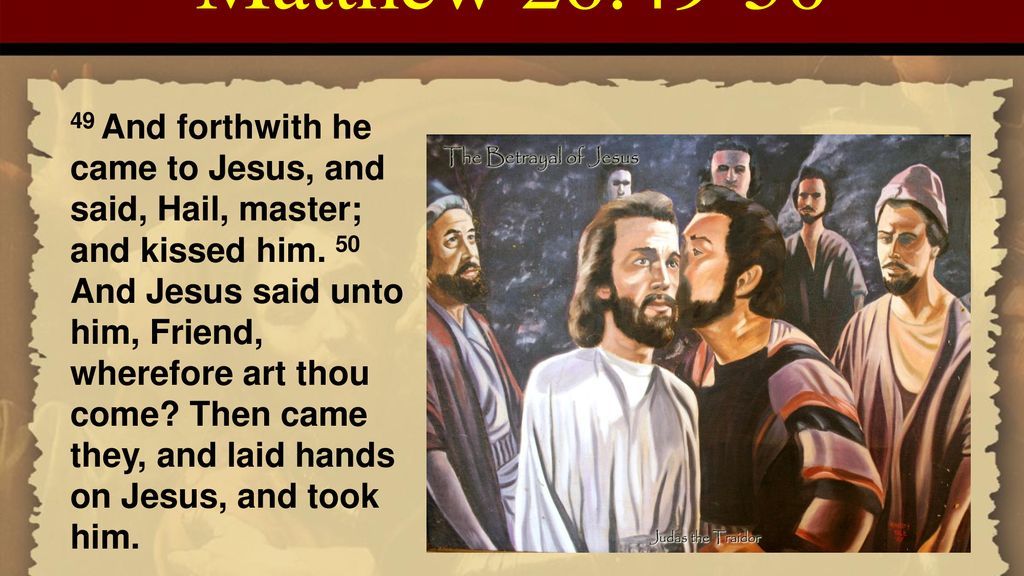 KEY SCRIPTURE: Matthew 26:50. “And Jesus said unto him, Friend, wherefore art thou come? Then came they, and laid hands-on Jesus, and took him.”

Judas a disciple of Jesus led the high priest and the Pharisees to take Jesus to be crucified. Judas had been mentored by the Lord. He was the treasurer (John 12:6). Judas had been stealing the contributions that others gave to the group. I believe the Lord knew that he was stealing from the group’s money, yet He aloud him to keep the money bag. Why did the Lord allow him to keep their monies although he was a thief? I believe the Lord was granting him the opportunity to repent. It could also be that, the Lord kept him in that role till he finally betrays Him, since he was a son of perdition. (John 17:12).

Judas was a friend yet a false one. He loved money more than the Lord. When Mary Magdalene made a sacrifice of the costly ointment on Jesus, he commented that, the ointment could have been sold and the money given to the poor. (John 12:4-6) The Bible said he said so because when the money is brought, he would be stealing some. What kind of friend are you? Do not love a person because of what you can get from him or her. Prov. 18:24 KJV” A man that hath friends must shew himself friendly: and there is a friend that sticketh closer than a brother”. The word says if you are a friend then your friendship should be based on genuine love for the friend, and not any remote benefit.

To use friendship as a decoy because of something else makes you a potential betrayer. Such a person would one day become an enemy.

There are a lot of people whose friendship is flawed with some remote advantages. Dear brothers and sisters walking in truth is freedom. The essence of living is being a blessing. The scripture says, it is more blessed to give than to receive. (Acts 20:35). Please take a lesson from nature. A mango tree lives to provide mango fruits and may be, leaves for the healing of certain ailments. The sun gives its sunshine freely without asking for anything in return. These elements of nature are well sustained because they play their respective roles to perfection. We as humans will be continually blessed if we make up our minds to be a blessing to whoever we relate with. Be always reminded that God is the judge. He weighs each one’s actions and will reward or punish according to how you act in honour of his word.

Proverbs 18:24. A man that hath friends must shew himself friendly: and there is a friend that sticketh closer than a brother.

Psalms 75:7. But God is the judge: he putteth down one, and setteth up another.

One thought on “FALSE FRIENDS”